Following on from the Leicester Model Aero Club (LMAC) AGM this week where I was honoured to become your new Chairman, I just wanted to share a few words for those members who couldn’t attend and to reiterate the points I made as we move into 2020.

Firstly, on behalf of the LMAC committee and the whole membership (past and present); I would like to extend a huge thank you to Andy Prime for his excellent stewardship of the club over the past 20 years as Chairman and 33 years spent on the committee. Andy has made many significant contributions to the club over this term – far too many to single out. Many thanks once again Andy and I look forward to flying with you moving forward.

As I stated at the meeting, I have no aspirations to make significant changes to the way the club is run in the short term. I really don’t think there is a need at this time. Having visited several BMFA events and other flying clubs over the past few years, we truly do have a premier setup at Gumley and, for me, it’s important to maintain and protect what we have.  As a committee, we will continue to look to improve the club and take on board new suggestions.  The club continues to benefit from a healthy financial position, but in such a low-interest-rate environment and with rising price, we will continue to keep a close eye on spending whilst maintaining a reserve/emergency fund.  As we have done in the past, monies will be invested where required for the betterment of the RC flying hobby and club in line with the wishes of the late Jack Marsh.

Over the past couple of years, we’ve seen legislation introduced in response to drones being used where they shouldn’t – obviously having an impact on ‘traditional’ RC flyers across the world. It is my hope that the introduction of the new CAA proficiency test will not put too many of these traditional RC flyers off from continuing with the hobby.  I’m happy to support any members with this as well as the continued push for members to attain BMFA achievements. As a club, we will be running some further achievement scheme workshops during 2020 and continuing with the training programme using the new equipment which has been purchased by the club to support this goal.

We will look to schedule some competitions in the event calendar for 2020 and I’m keen that we hold our annual Gala day in 2020 – it has not been possible the last two years due to poor weather. It has been encouraging over the last couple of years as part of the indoor flying to see a great crop of younger RC flyers progress. I think it is important that we look to encourage and recruit new members into the club. This is not always easy I know with youngsters being enticed by smartphones and games consoles, to the detriment of other hobbies and past-times.

I encourage all LMAC members of all RC flying disciplines to continue to enjoy the excellent facilities at Gumley and welcome any suggestions as to how we can continue to improve, whilst also maintaining a safe flying environment. Members are welcome to contribute to committee meetings and raise any suggestions with me personally.
Finally, I look forward to flying with you all moving forward and working with the whole membership in my new role as we look to improve and protect what we have at the excellent Leicester Model Aero Club.

Email ThisBlogThis!Share to TwitterShare to FacebookShare to Pinterest
Labels: Announcements 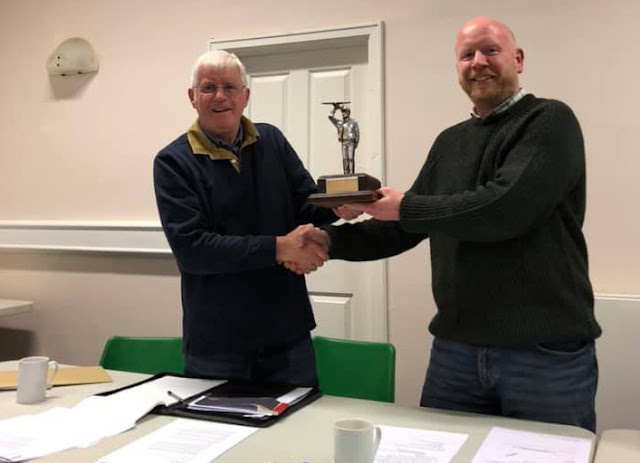 As we continued to promote and encourage members to attain the BMFA achievement scheme certificates, certificates were presented on the evening to Rob Macskimming, Tom Barwick and Eric Toon who received their Fixed Wing A certificates.

People who were not at the meeting who also attained certificates were Alex Judea, a Fixed Wing A certificate and Kevin Sarson with an A and B Fixed Wing certificate. 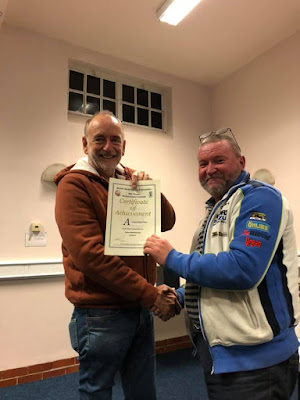 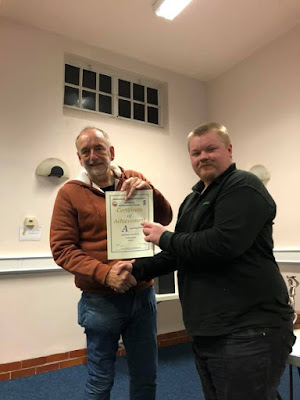 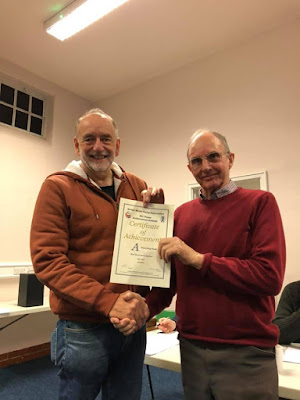