The History of the Leicester Model Aero Club

The club then transferred to a field at Evington just off Shady Lane, which later became a Prisoner of War Camp and is now an Arboretum. Just before the war the club moved to Stoughton, but lost this in 1943 when it was turned into an airfield for Stirlings and later Dakotas and Horsa gliders for the invasion.

The Club owes a great deal to it's first President, Mr.(later)Sir William Lindsay Everard MP, who was a great supporter of flying in all it's forms. He owned a DH Dragon Rapide, and a Puss Moth, and a full time mechanic and pilot, all situated on a beautiful private airfield at Ratcliffe-on-the-Wreake, complete with hangars, alongside the A6. This was also suitable for night flying with a beacon which could be seen for up to 40 miles away.  During the 1930's he used to have air weekends, when an average of 100 planes flew in to Ratcliffe, with up to 5,000 spectators. During the war he wanted to form an Air Centre in Leicester to embrace all forms of flying where all those interested could meet, i.e. the Aero Club, Gliding, Model Aero Club, A.T.C. etc. He arranged for monthly lectures in the main hall of the Leicester Technical College and many notable aviation people who were his guests at Ratcliffe Hall gave lectures, including Lord Brabazon of Tara, holder of the British No.l pilot certificate, Sir Frederick Handley Page, Dr.Roxby Cox, Latimer Needham founder member of the British Gliding Association and holder of the First 'C' soaring certificate in Britain. Sir Lindsey was the Founder President of the Leicester Aero Club (full size aircraft) and he presented them with a DH Moth in 1929. After the war the Aero Club used his airfield at Ratcliffe until his death in 1949.During the war Ratcliffe Aerodrome was used by the Air Transport Auxiliary. Sadly after Sir Lindsey's death in 1949 the Air Centre terminated.

Sir Lindsay presented the Leicester Model Aero Club with a superb silver cup for an annual competition of rubber driven duration models. He also allowed the use of his airfield for this competition, held for the first time in 1936.

At this time the Leicester Aero Club (full size aircraft) flew at Desford Airfield which was taken over by the M.O.D. during the war.

Prior to 1939 this was a farm owned by the Cooperative Society, and the Leicester Model Aero Club had permission to fly there, providing they did not upset the cows!. It was turned into an airfield during the war for training Horsa Troop Carrying Gliders for use on D Day. After the war the Leicester Aero Club used Sir Lindsey's airfield at Ratcliffe until his death in 1949, when they moved to their present home at Leicester East Airfield. After the war the Leicester Model Aero Club was able to fly there for a short time, and the Barnstormer Model Displays were held here in more recent years.

Also during the war the LMAC started indoor R.T.P. (Round The Pole) flying at the Tramways Depot in Humberstone Gate, next to the Bell Hotel, by Kind permission of Chas.H.Stafford, who had been a balloon observer in the first world war, and whose son was a club member. The Tramways Depot housed all the tramcars at night and was entered through a tunnel between the shops in Humberstone Gate opposite Lewis's tower. We also flew free flight microfilm models on Sunday mornings at the Carlton Cinema on Gipsy Lane, thanks to Mr.Les Dalby the manager, and also a keen modeller.

Because many of the members were too young for military service, the LMAC was able to operate successfully throughout World War 2. Like the famous Windmill in London we can also say, "We never closed."

After the War most of our members returned, and with the advent and availability of cheap Diesel engines the Club expanded rapidly, and for several years were able to fly on Rearsby Aerodrome, the home of the Auster Aircraft factory.

The first S.M.A.E. contest for power duration models on a limited engine run, was held at Stoughton Aerodrome on September 16th, 1946 and was a great success, attended by many modellers from all over the country and as far away as Ireland. 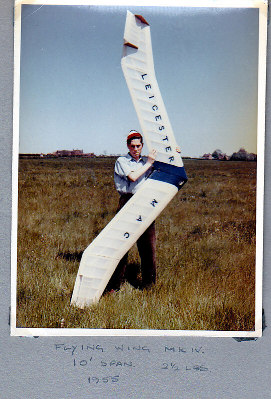 After the war in 1948 Stoughton (or RAF, Leicester Forest East) Aerodrome was taken over by the Royal Hussars who moved in with their tanks. Mr. Lavejck, whose son was a club member, was the Shell Midland manager and had business dealings with the Army, managed to get permission for the club to fly there and use a nissan hut as a club room. In 1950 when the Hussars moved out the aerodrome returned to farming, with crops between the runways. The shooting rights were then sold and the club was threatened with all sorts of penalties if we went off the runways to retrieve our models, as it could upset the pheasants. The aerodrome was finally taken over by the Leicester Flying Club and is now known as Leicester East Aerodrome.

Picture left of Geoff Brewin taken at Rearsby in 1954. Geoff was a member, 1950-60 or thereabouts, and Competition Sec for some time. The model was designed to meet the FAI max wing area rules of the time!
The LMAC then moved to a field near to Barkby, and then to Ratcliffe Aerodrome, where the original Auster Aircraft test flights were made. This was a long trip for most modellers as cycling was the usual mode of transport.
The club was then fortunately able to obtain permission to fly at Braunstone, Leicester's Municipal Aerodrome 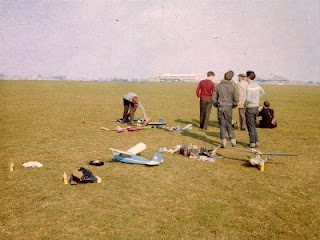 Picture taken circa 1961-62, is certainly Braunstone

Pictures left, show a scale a competition circa 1961 at Braunstone, Paddy Archbold holding model, and an original membership card of the time.
This all came to an end when Charles Clore bought Braunstone to convert it to warehouses for his shoe empire.
During the late 1970's members of the club who flew controlline, started to use St Margaret's Pastures next to Abbey Park in Leicester City. Ideally situated in the middle of the City, away from housing and bordered on three sides by the River Soar, the Abbey Park boundary fence, and the St Margaret's bridge, it was just about as ideal as it is possible to get for controlline flying.

Constantly fighting off officialdom that insisted people could not fly model aircraft in a public space, (unless there is a specific by-law prohibiting such activity, you can) and footballers that seemed to assume they had a god given right to kick a ball, into, around, or at any person or persons present, was not an easy task, but persistence prevailed. The Sunday morning flying drew a lot of interest  from passers by, and the club gained some new members along the way. Associated picture was quite typical of a Sunday morning, with St Margaret's bridge in background.

Turning the pastures over to enclosed sports areas eventually prevented controlline flying on the site, and another era passed into history.

During this period the club had the use of Wymeswold Airfield for 25 years before the Ministry of Defence sold it back to it's original owners.

A prominent member from the very earliest days was Jack Marsh who worked tirelessly for the LMAC in many capacities. Upon his untimely death in the ear1y 1980's. The Club was amazed to learn that he had bequeathed nearly all his money to the LMAC, in the hopes that the Club would be able to fund its own permanent flying site. This allowed the purchase of the existing 43 acre site, for which the Club was able to eventually obtain permanent planning permission for model flying with very few restrictions. This also enabled the Club to purchase a superior type of clubhouse with heating, lighting, hot and cold running water, a fully equipped kitchen and a separate toilet block. 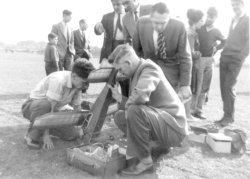 This newsletter was loaned by Peter Catlow, with the comment, "A lot of the same names are still around in the club today."  I'm saying nothing. (Admin). This document shows just how active and all encompassing the club has been in the past. July 1978 (16 pages)

Please report any errors or inaccuracies, or send additional material to Admin so that this page can be kept up to date. Any pictures taken at any of the sites mentioned pre 1960 would be especially welcome. 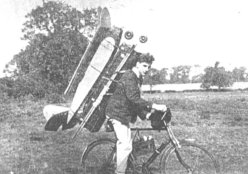 This Picture finally identified!
It appeared in a March 1941 Aeromodeller Magazine, with the following  caption:
D.J.Dawson and G.E.Dunmore, of Leicester, sound an active pair of lads, having built several biggish American designed machines powered with Ohlsson 60 and Foster engines; also a Porlock Puffin with Spitfire. Photo 4 shows how they have solved their transport problem.
Now all we need to know is, which one is riding the bike?