The final LMAC Indoor session of 2013 took place on Saturday 14th December at Parklands Wigston and was very well represented by LMAC members and some new faces too. It was LMAC’s pleasure to welcome Kevin Dodd, Secretary of the MAAA (Model Aeronautical Association of Australia) who was visiting the U.K. with his wife Nanette, after attending a recent CIAM meeting in Switzerland. Kevin shared his insights into model flying related matters in Australia and enjoyed talking to LMAC members showing off their indoor fleet. It was interesting to hear from Kevin that in Australia they don’t tend to have the concept of winter indoor flying sessions; moreover these are generally held in the summer months when it is too hot to fly outdoors in the hot temperatures! One LMAC member couldn’t help raise the question ‘do you only fly inverted down under!’ Anyway, it was great to welcome Kevin and his wife Nanette from the MAAA (BMFA equivalent) and we wish them a safe return trip back down under and many more safe landings to come. 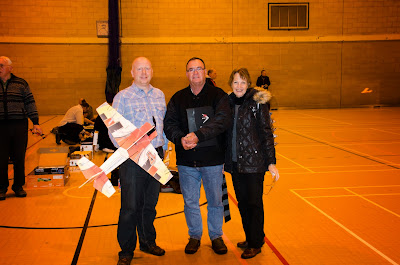 Many thanks for the pictures from LMAC Vice Chairman Howard Murphy. Probably the most interesting picture was Heli flying Mick Middleton who managed to land his little Blade Quadcopter 15 feet up on a small ledge. Matt Chamberlain would personally like to thank all those who have attended the 2013 Indoor Flying sessions for making it a growing success. Another good attendance in January/February 2014 will hopefully mean that there will be no charge for the March 2014 Indoor meeting. Watch this space for more updates in 2014.

Finally, may I take the opportunity to wish you all a very Happy Christmas and wish you all the best for 2014. We hope Santa is good to you and there are some new aircraft to try out on Saturday 18th January 2014, the next indoor meeting.

Top photo's H. Another fab night, many thanks guys.